We Made It Through Week One

The first week of homeschool is over! I can’t believe we all made it through alive! There were ups and many downs, so many downs! Here we are starting week two knowing more than when we started week one. Let me tell you, week one was rough and there was so much learning on my part.

We started with a very strict schedule, yes I probably needed more time to deschool so I would learn not to have a schedule like that, but honestly, I don’t think any amount of deschooling would get me not to do a schedule. I had to experience it for myself. I had it set up so every twenty minutes would be a subject or break. I stretched it out for 4 hours too. I wasn’t sitting right there with them except for Language Arts and Science. The other subjects they could just come and ask me for help as they did the curriculum online. Basically, the schedule was just like a day at school. That was the first mistake.

After Tuesday, remember, Mondays are our field trip days so Tuesday was our first learning day, we adjusted the schedule together and moved some subjects around and cut lunch down to 45 minutes because an hour was too much. But we were still more like a traditional school and I felt we needed that schedule.

Wednesday was a MESS! Lots of arguing and emotions and learning from both the boys and myself. We started out okay but as the day went on it became very obvious that one kid was just clicking next and not reading anything. He couldn’t do Math because he clicked on a link he wasn’t suppose to and when he didn’t understand it, he had a meltdown. When we looked over his work together when he was done, he admitted that he would just click the next button to finish as fast as possible. He had no idea what he had just looked at.

We came home that day and decided that Thursday we would start school around 2:00 PM, or when we got home. So instead of starting school at 8:00 AM, they woke up at 6:00 AM and we all got ready for the day and even had time to get chores done before we headed out.

We got home Thursday at 2:00 PM and started school. We stuck to a schedule still (I know, I know) and were done in two hours. I sat with Gavin and had him read all instructions to me out loud, then we would do the work together. Logan breezed through his work with a few questions here and there but was done fast. During this time they sat next to each other at the kitchen table and it was hard for me to get them to focus on their own work since their eyes kept drifting to the other’s computer. I decided I needed to get them desks and separate them.

Finally, Friday had arrived! I couldn’t believe it we were at the end of the week and still in one piece (mostly.) Paul and I came up with a new set up at home Thursday night. We got home Friday at 3:00 PM and started school and were finished within an hour and a half because of our new schedule, or should I say, lack of a schedule.

First they sat at opposite ends of the kitchen table and I was in the middle. Next I asked each of them what subject they wanted to start with. They both said Science. I had them each do one lesson in Science and since it wasn’t a short lesson we moved on to the next subject. Logan picked Math and Gavin picked History next. Again, they each did one lesson. I trusted Gavin to read by himself this time and it proved to work! As he was reading, he kept telling me about what he was reading and getting excited about it. Logan moved on to his next subject and then Gavin followed. I didn’t say 20 minutes on each subject. I just let them continue on when they finished one lesson. Some lessons are small and on those days I at least have them start the next lesson.

When they were done Friday, they did chores and were done for the day! It was easy and everything ran smoothly. If you know me at all, then you know that I love schedules but for homeschool, I must say, it’s not a good fit for me to have a schedule. Let them do it at their pace and the order they want and it works out so much better. That’s one lesson learned this last week, among so many others!

If you start homeschooling your kids, it may go better for you than it did for us the first week, but if it doesn’t just remember my week from Hell and hopefully it’ll help you through yours! Yes it was a week from Hell, this post doesn’t even do it justice. We are starting a second week learning tomorrow and I will be using the process from Friday. Except tomorrow is Tuesday and Gavin has karate so we will be doing homeschool on the road in between work and karate. Let’s see how this goes… 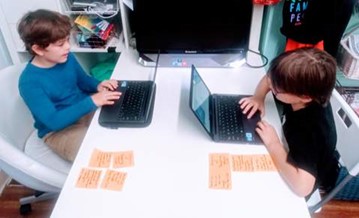 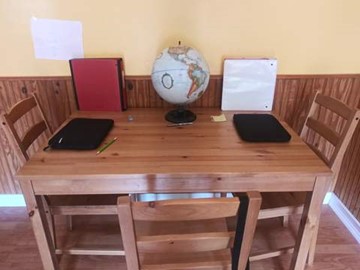